Just a quick post to say: Hello! I’m still alive! But I’m working on a new website which is one reason why I haven’t really been posting here.

Anyway, now it’s fall, and I haven’t even updated since summer! Summer was lovely but went by way too fast. There were trips to Long Island and one long trip to Costa Rica (again!) complete with car misadventures, iguana sightings, and many many beaches on the Pacific coast.

There were bicycle rides to the beach and museum outings and readings. And at the beginning of September, a trip to the midwest for family, friends, the Minnesota State Fair, then the most wonderful one week residency a girl could ask for at Tofte Lake Center at Norm’s Fish Camp. Loons and bald eagles and the Milky Way and s’mores with new friends and kayaking on a crystal clear lake. It was truly magical. 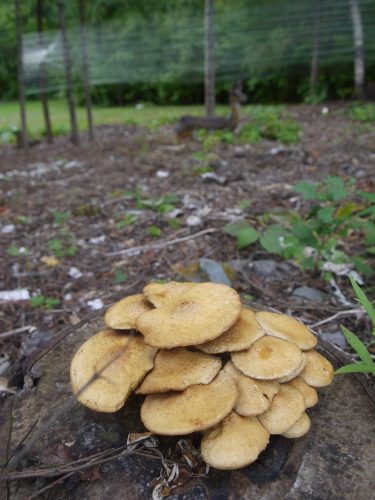 This autumn is turning out to be pretty packed, too, with a new job and several new pieces coming out in some literary journals I really admire. Also, hey, I’m an artist-in-residence in Lower Manhattan Cultural Council’s Workspace program! With my own studio and everything! So I think my work goals of finishing this collection early next year is definitely doable. I’m even already thinking about my next big project…

On the 3rd day in Costa Rica, ijl and I woke up early to try Nacional Parque Cahuita again and with our swimsuits on. Again, there were multi-colored crabs hiding away in their sandy crab-holes and capuchin monkeys feasting on fruit in the trees right by an elevated wood path we took. Also, howler monkeys, hermit crabs, herons, egrets, sandpipers, a tiny yellow eyelash viper curled up around a branch, and even a mother sloth and her baby! The nice thing about sloths is that they move slowly enough for you to take plenty of photos 🙂 I’d also been quite excited about possibly seeing a toucan (flying bananas!) so it was really incredible when we saw a pair of collared aricaris, like smaller toucans, hopping around on a branch by the path.

We swam both in Playa Blanca and a sheltered beach by Punta Cahuita. A tree had fallen right into the water and as we came near, crabs on the trunk would skitter away to the other side. The water was luxurious and calm, perfect to float in. But we found some unexpected passengers on us afterwards, clear little sea mites with dark eyes that clung to our skin so we had to pick them off.

For dinner, there was coconut rice & beans with chicken and chicken rondon, a coconut milk stew with many different starches ranging from yucca and taro to sweet potatos. Funny how few fresh vegetables are included there—you’d think the climate is well suited for it but it’s not apparent on the local menus. Cahuita itself was a tiny beach town with a main street that split once from the bus station and then the main road to Playa Negra. Many pizzerias and cabinas but few sodas (casual eateries) and off the main streets, only a few houses with fields in between. A school across from an empty lot with a rooster pecking away at the dirt.

The next day, we took a bus to Puerto Limon then a cab to the tiny port at Moin where Tuca met us. We clambered onto a 15 seater boat but hit a bump right away as our captain, Manuel forgot his case and had to turn back. His translator was a teenage boy who translated in a fairly monotone voice, almost angry, but Manuel didn’t spot many animals anyway. There were plenty of birds including swallows that followed and landed on our boat, but Cahuita had already spoiled us for wildlife. We did see a tiny crocodile hanging out with a bunch of branches on a bank, a Jesus lizard, and some sleeping sloths very high up in the trees. And the translator told us about how two people had been eaten in the river by crocodiles so one shouldn’t try swimming or wading in it. Four hours later, we landed in Tortuguero and took a room at Cabinas Tortuguero for $25 after looking around a bit. Alright but definitely not as nice as our cabina in Cahuita. The hammocks outside each room were nice though! 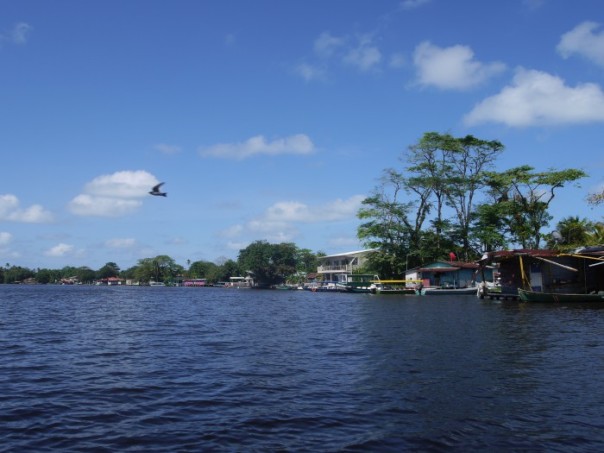 Tortuguero is a tiny town on a long thin island bordered by the Caribbean sea on one side and Tortuguero River on the other and could only be reached by boat or airplane. It’s incredibly narrow so walking from the docks/nightclub with Jar Jar Binks statue/restaurants on the water to the beach facing the sea is pretty quick. But the sun was strong, especially on the main walkway through town (no cars! Only pedestrians plus the occasional kid on a bike.) Near a central square/park, there were remnants of heavy machinery which I thought had probably been placed there as sculpture but it was hard to tell. A clown with an open mouth seemed to function as a garbage can nearby. Further east, a maze of small alleyways of houses near the national park entrance to the east, hiding a bakery where we got some kind of pastry cone filled with dulce de leche. Many many dogs that just wandered around and played with one another or slept or begged for food. One was so fat that ijl and I were surprised it could move as jauntily as it did.

On the 5th day, we woke up early to rent a 2-person kayak after a breakfast of empanadas. We hadn’t done enough scouting the day before but it was easy enough to find someone who took us to a kayak rental place. We went down Cano Harold and Cano Chiguiro and got stuck on a branch in the middle of the river at one point. Luckily enough, a canoe full of tourists were fairly close by and helped us get unstuck. We saw more herons and a giant green lizard like a tattered leaf. We kayaked down the river and into tiny waterways surrounded by tall grasses and water plants with leaves that just floated atop the water and roots that drifted down but clung to nothing. Beautiful blue Morpho butterflies would glide past, shimmering, while a flock of bright yellow butterflies flew around the turtles perched on logs, sometimes landing on their heads. A symbiotic relationship? 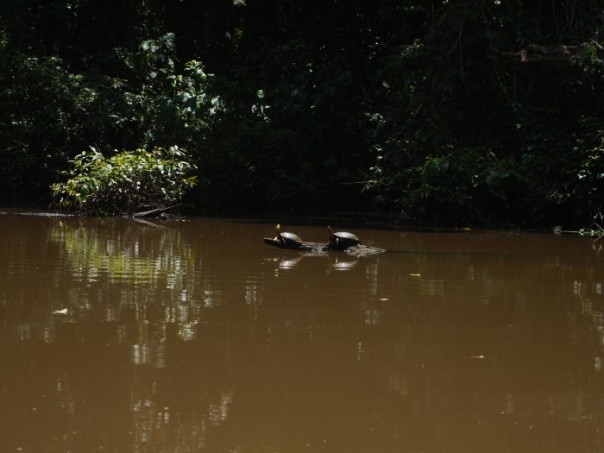 After 4 hours, we were pretty tired so went back but decided to hike through the park. Ijl thought we’d need the rubber boots that could be rented for $1/pair at houses lining the path to the park but they turned out to be terribly uncomfortable, creating blisters where they rubbed, so we ended up taking them off anyway. The path wasn’t too wet and even the mud was rather pleasant. Leafcutter ants all over the path—I’d read about how powerful their jaws were so walking around their meandering lines in bare feet was a strange sort of dance. I wonder if we’d gone the wrong way because there were markers every so often with paths that led out to the beach, probably to turtle nesting sites, but the path we walked on just petered out after a while. 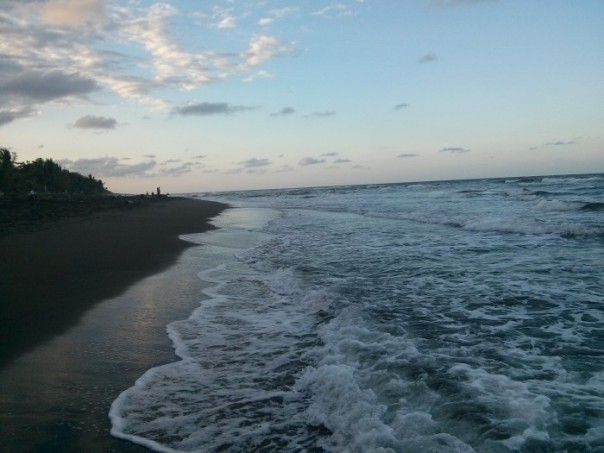 Dinner at Tutti’s, near the beach. The meals in Costa Rica seem rather small by American standards, especially the portions of meat, but theirs was a bit bigger than others. After dinner, we saw pool tables inside an open storefront, a few slot machines near the entrance where the owner was also selling an assortment of fried food. One man played the slots while we played pool. During the evenings, the smell of grilling meat permeates the air but I don’t know when they sell it (or maybe it’s only dinner for the folks grilling?) but the restaurants close fairly early and so, we tended to eat dinner early. On the way back from a walk down the main path, a Hercules beetle skittered past, its giant horn casting a shadow on the sidewalk. We’d head out by boat the next day.

In Liberia, we were the only foreigners to take the bus from the airport to the city. The air was dry and hot and swallows darted through the air. A bird that resembled a crow but with a fanned tail sang the sounds of car alarms and other birds. We’d later find out they were everywhere and we’d never know what its real song sounded like, only the mimicking they did.

The landscape was not lush the way we’d expected—dried stalks of grass, all yellow, and dusty. We only had a glimpse of the city (a Papa John’s, a TCBY) before we took another bus from the Pulmitan station, which we’d seen from Terminal Liberia, the buildings being so low. Before we took our San Jose bus, there were chicks being sold on the street, hundreds in three big cages outside one store on the sidewalk near the station. I managed to order a casado—rice, beans, a meat and potato mixture, chicken, salad, a tortilla. The lady who handed me my food tried to teach me how to say, to go, but my ear and my tongue weren’t in sync. Funnily enough, it was probably the fastest meal I was given in Costa Rica.

The bus ride was long and there was a surprisingly large amount of roadwork being done, leading to occasional delays. I’d heard about Costa Rica’s bumpy roads before but found they weren’t too bad at all. In San Jose, on St. Patrick’s Day, we found groups of drunken older white men outside casinos, the occasional glitter shamrock on a girl’s cheek. Our room at Casa Del Parque was in a converted garage with tons of street noise and curtains but no door. The hostel itself was in a beautiful house near the park but there were very few places to eat nearby and we found that many places in Costa Rica shut down relatively early.

We took a 6am bus the next morning to the Caribbean coast, passing mountains and jungles, banana plantations by Puerto Limon. In Cahuita, we had a cabina all to ourselves with a blue & white tiled bathroom that drained outdoors, letting in the bugs in the evening. There were howler monkeys in the tree and just down the road, Playa Negra, a gorgeous black sand beach with very few shells and no litter. Crashing waves that bowled you over in the warm water. We’d eaten lunch at another soda, those ubiquitous casual food stands, and tried a cas agua fresca for the first time, a tangy fruit juice drink made from cas, also known as sour guava.

We made our way to the Cahuita National Park rather late, not realizing how strict they were about their closing times. In the hour we were there, though, we saw a capuchin monkey up close as well as a raccoon that meandered past. Little crabs skittering away into their sand holes and leaf cutter ants everywhere. At the point where you cross a little creek, we saw a trio of jewel-toned birds, yellow, blue, and green, as well as a blue heron and a white egret. We decided to take a longer hike through the park the next day. 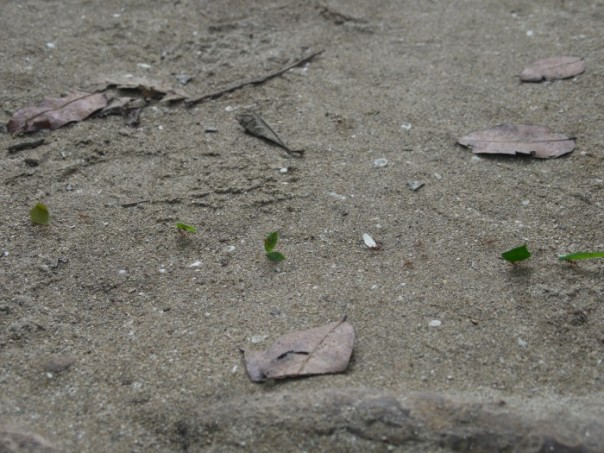