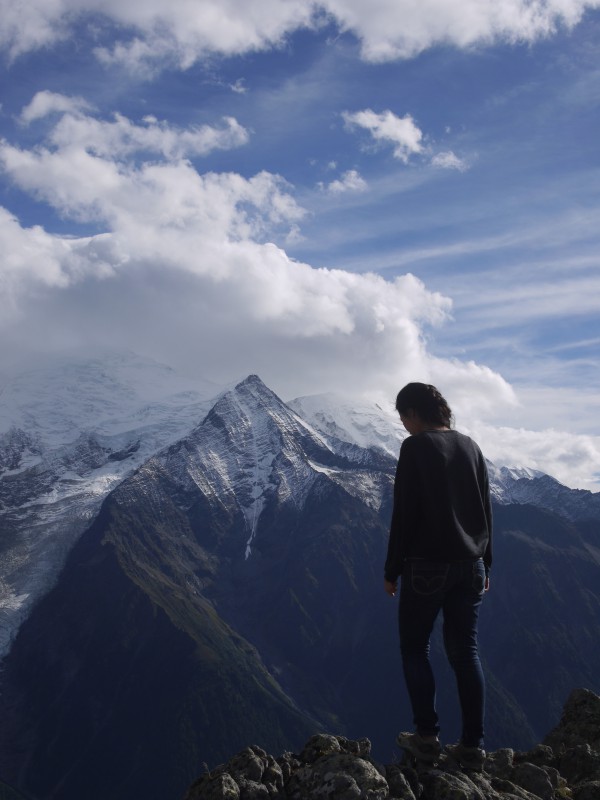 Pizza with a drink on the waterfront in Geneva costs 20 swiss francs so instead, we go for hot chocolate and people-watch on the square. The water fountains are actual fountains—lions gushing water from their mouths or faucets so that you have to bend your head down to drink. All over are signs for watches and cars. Later, A tells us that employees at the UN and the other major organizations in Geneva can receive a 40% discount on BMWs. The tram takes us all the way out to the French border where we find that the reception desk at CERN is closed. Thankfully, the gas station attendant across the street takes pity on us and lets us use the phone.

A & S live in an identity-confused little town with both quaint old French houses in white and brown and big apartment blocks like The Boat. In the dark, we walk down a backyard trail that leads to the town and milk the tin cow, a machine that sells milk and bottles for the milk 24 hours a day. A says it is the only thing open 24 hours. We pass the pommist’s window. He only sells pommes, so both regular pommes (apples) and pomme de terre (potatos.) Unfortunately, we never get a chance to meet him. Saint Genis-Pouilly is a 3 boulangerie town which is quite good since they take turns with their days off. On our last hike in the area, ijl and I had walked to Thoiry, a purported 1 boulangerie town and of course, it was closed. But a friendly lady had directed us to the tea room by the train station that also sold pastries & sandwiches. So what made it not a boulangerie? Perhaps the seating area. Most boulangeries we’d seen in France were all to-go establishments (or takeaway as it’s called in Britain.)

The next morning, we took the Y bus all the way to the airport but didn’t realize that the bus only collected its fare in coins. Luckily, the bus driver told us not to worry about it. From the airport, we booked our easyjet bus ride to Chamonix and half an hour later, we were two of three passengers on the bus. The day had started out rainy but by the time we reached Chamonix, only a light drizzle was left. The mountains rose up all around us, on one side, snow-capped Mont Blanc but the cable car up on that side was closed due to weather. Instead, we took the cable car up to Planpraz and hiked the TMB trail from there, always with a view of Mont Blanc although its tip was covered with clouds.

The trail changed as we walked it, from Planpraz and spiraling around eventually to Brevent, from scrub and grass to pure rock. A marmot peeked out from the rocks around Brevent. Crows soared overhead. Tiny flowers dotted the trail. There was a deep blue lake whose surface sunlight glimmered off of. And then the descent down from rock to meadow to forest, a curving trail filled with rocks. In the forest, an abundance of different varieties of mushrooms, the first we saw a huge red toadstool that looked as though it belonged in a fairy tale. We ran down the narrow trail, slipping and sliding on the rocks, the ground giving way beneath our feet and arrived back in town by 6. Our bus back was late to arrive but we were the only passengers. 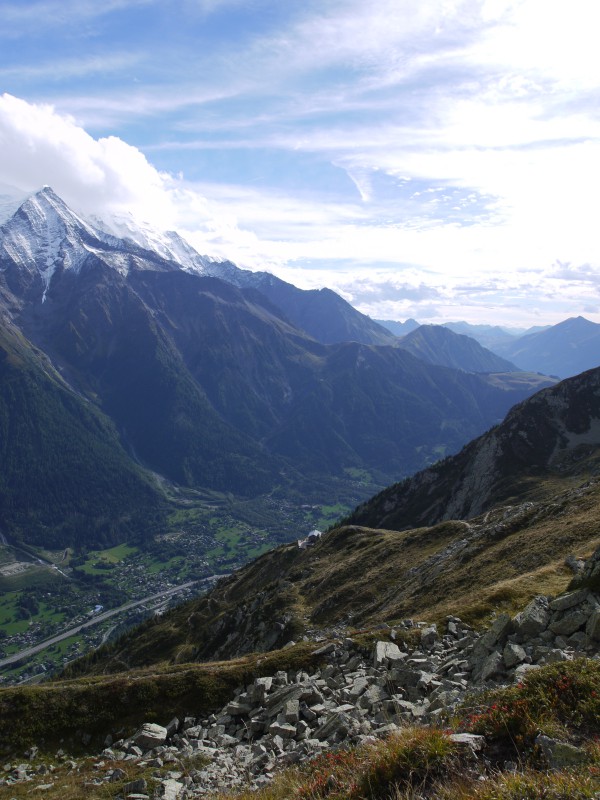 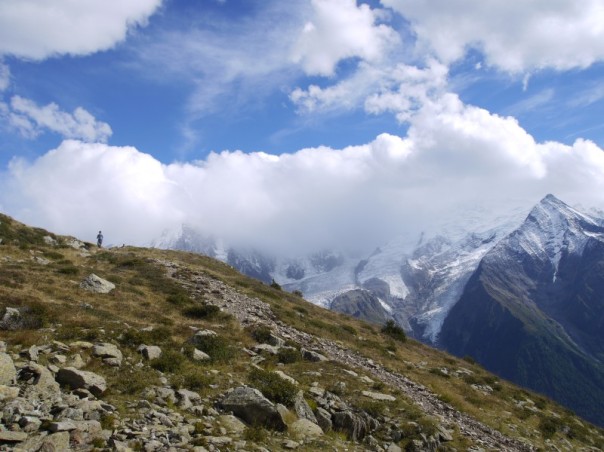 The day after dawned rainy but A took ijl and I to Annecy for its lake and cute medieval town center complete with canals and castle. We had Breton crepes by the canal served in a very swiss restaurant and watched the swans swimming. By the time we’d wandered around the entire historical area, the clouds drifted away, except for one that hung out in the middle of the mountains that were suddenly unveiled. 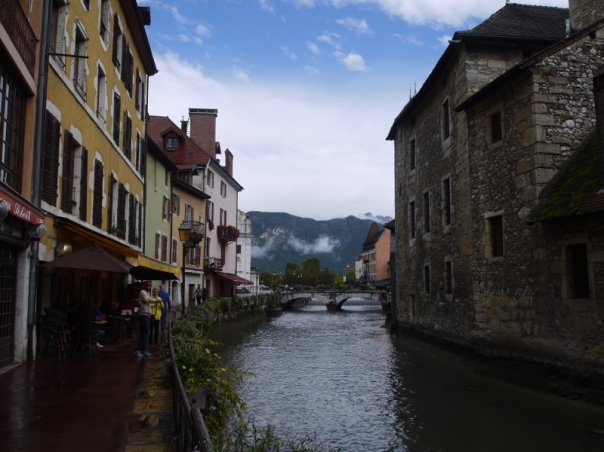 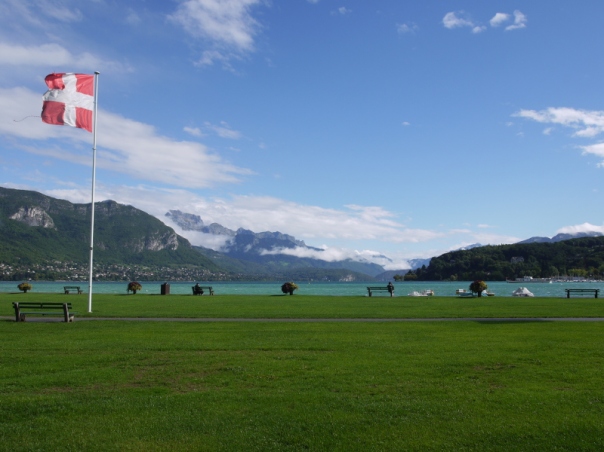 Then a quick tour of CERN and into Geneva for a dinner of thai food, sitting by the lighthouse at the edge of a dock on Lake Geneva, haunted by the soft quacking of the ducks.

To the Jura the next morning with our early hike to Thoiry. The path was steeply uphill although we were led astray by a fake path that cut past beehives and into meadows were cows had left their mark. We had originally planned to get up to Le Reculet, the 2nd highest peak in the Jura but realized we’d misjudged timing and effort when we reached Le Tiocan and started up a path that was all rock and incredibly steep. Not the most pleasant climb so we cut our losses and headed into Geneva to catch our train to Lyon.

Hey guys! I’m actually in Shanghai right now after getting in late last night. It’s the October national holiday here so everything’s pretty 热闹 (exciting and lively!) with tons of people crowding the Bund and Chinese flags everywhere—in hair, in the sky, in windows. Early this morning, I saw a bunch of photographers following an old man with a giant Chinese flag kite and wondered if he was famous but nah, I think it’s just because he has a flag kite. I do love the kite-flying here though. 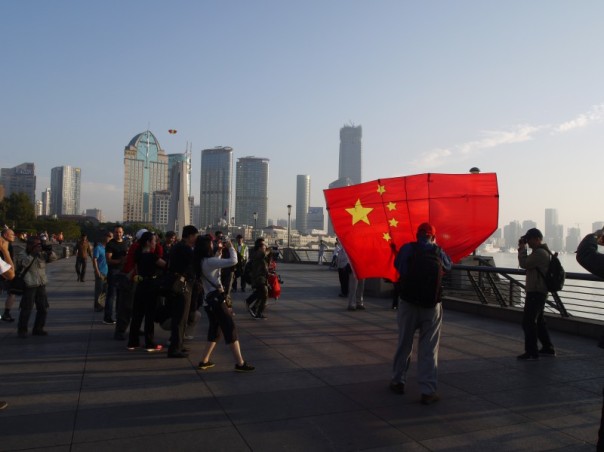