At Omi, the weather is changeable but the wind often howls outside the windows, high as we are, on a hill overlooking the sculpture park. Young frogs cheep loudly, both during the day and at night, and when the sun sets, it outlines the Catskills in the distance in orange and pink. After dinner, we drink wine and talk by the fire. Once, while it snowed, we drove through winding unlit roads to a bar in a Victorian, neon Budweiser signs in the window. Inside were floral curtains and garlands of fake flowers for Easter, drinks almost half the price of ones in the city. How long has this bar been open, we asked its owner of 37 years. Since the end of Prohibition, she said, and we were the first to sell hot wings around here. On the trip back, three deer bounded across the road, their eyes reflecting our headlights back at us. 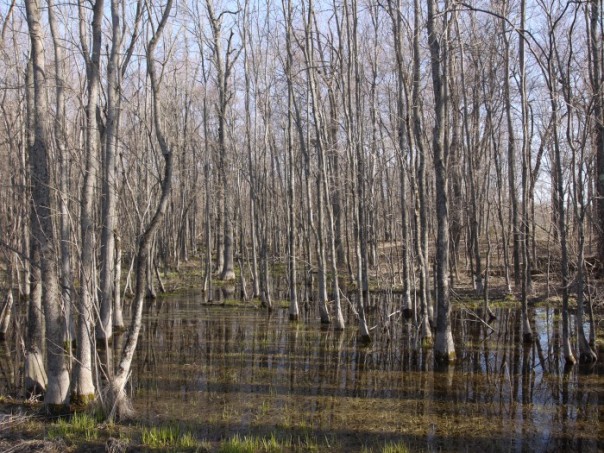 During the day, our home is a converted barn. My room has two twin beds turned into a king, a large wooden table as a desk. In the bathroom, the water smells of sulfur, most strongly when you shower. My room is warmer than the rest of the suite. Upstairs, the rooms have loft spaces to sleep in. During the summer, when this place is for artists, they sleep two or three to a room but in the spring, the writers have more space and less company. Ants wander freely through the kitchen in the main house and once, a hawk soared overhead, barely out of reach. I take runs in a 3.5 mile loop, passing pig pens and cows, beautiful young horses and an occasional groundhog, its small pointed face wary as it watches me from a hole by the pumphouse. In the barn is a silo where we lose ping pong balls in its dark depths and also, studios, some completely empty but for birdshit, and some full with pottery equipment, bicycles, strange machinery.

The sculpture park is set on swampland and there are patches of skunk cabbage everywhere. I sometimes write in the Visitors Center cafe but mostly in my room or the main house. I’ve been here for over two weeks now and have written two pieces: one a longer story set in Harbin, the other a piece of flash fiction adhering closely to the Searching for the Sun folktale. There’s so much here that I’d like to read, not only the books in the library with books by previous residents including Kiran Desai, Gary Shteyngart, and others, but also the books written by the other residents who are here with me. On the weekends so far, we’ve gotten guests from publishing houses, first Jill from Archipelago Books and this weekend, Chad and Kaija from Open Letter and the blog, Three Percent. Both these presses deal mostly with translated work since we have a fair number of translators in residence here and it’s been fascinating hearing about the process of translation and its place in publishing.

This weekend, we did a poetry reading at the Chatham bookstore, many of the works read in different languages. It was a fun gathering and included a young boy who recited a Latin “rage-vent poem” which was amazing. I read my poem, If/then, which I thought was somewhat suitable since it’s about Chinese although I wish I’d had something to read in Chinese since so many people were speaking other languages and it was just fascinating to hear.

The time has been going very quickly, despite what seem like fairly long unstructured days. I’m hoping to get several more first drafts of stories done before I go. It’s a good thing I have ~2 more weeks!

1 thought on “Country Living at Omi”