I hiked another mountain today by wandering through the Zhejiang University’s Yuquan campus, away from the main gates until I reached a park and then a small hidden gate near some very run-down looking apartments (apparently, they are temporary dorms, according to the sign.) It’s funny that here in Hangzhou, where there are rows and rows of mountains and tea hills right inside the city, sometimes it can be difficult to find the actual pathways hidden down side streets and alleyways, behind large factories or maze-like residential complexes. It’s part of the fun though (big gates that say MOUNTAIN THIS WAY would just be too gaudy) and I admit that I enjoy the hunt almost as much as the actual climbing. Today’s hike had actually numbered every 100 steps! 700+ steps for the win! 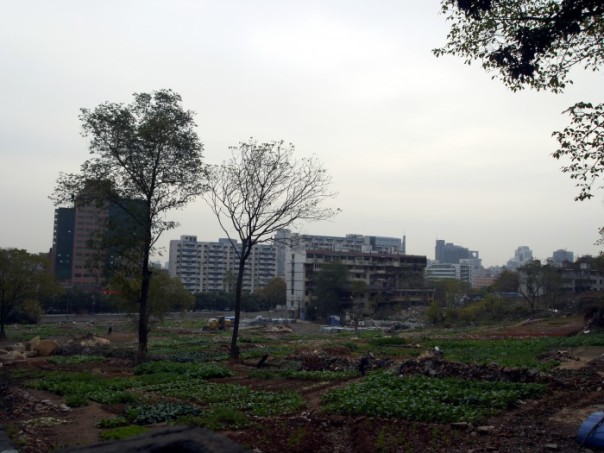 Along the way, there were very few people since it was not only a weekday but the sky looked very ominous and gray. Those whom I passed were mostly older, some wearing suits and shiny leather shoes and others wearing sneakers. One man brought three dogs, their stubby legs barely clearing the steps. The diversity of the mountain-climbing crowd this time wasn’t as great as when I was at Huangshan (see what I just did there?), where you’d see ladies in heels, a few children (especially one poor kid whom we saw hiking the western steps up which takes about 6 hours!), men in business suits (why?), as well as people who went all out on their hiking gear with hiking sticks that matched their jackets. It amazes me that people do hike in heels here, not just one inch ones but up to 3-4 inches! Especially since the stone steps that comprise most of hiking here is really hard on the balls of your feet; even with the cushioning of hiking shoes, my feet were in a lot of pain by the time I’d descended down Huangshan (黄山). But major props to the porters who carry everything up the mountains by foot, from vegetables to suitcases to bedding to humans who got tired partway through. Now, some photos.The first day was all heavy mist. 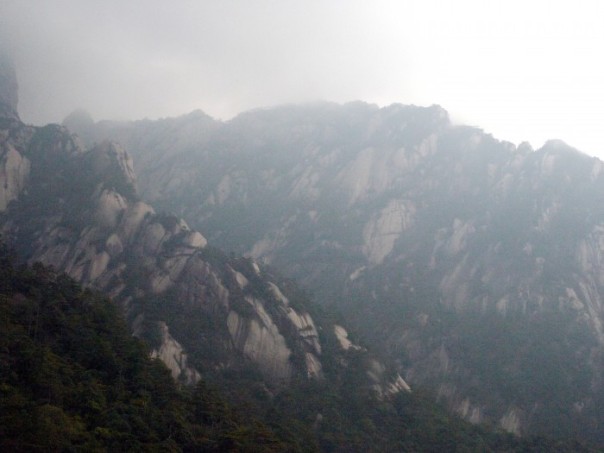 The second day, ML and I woke up at 3 and hiked in the dark to the lookout point we’d decided on the night before. We huddled in the dark, the howling wind around us because we were so high up, and watched for the sky to lighten. After sunrise, there were wild monkeys (including a baby!) and the stone of Monkey Gazing at the Sea (猴子观海) and then a descent into the Western Canyon before we decided to head back up when we’d heard the other exit was closed. Then the long descent down (~6 hours.) 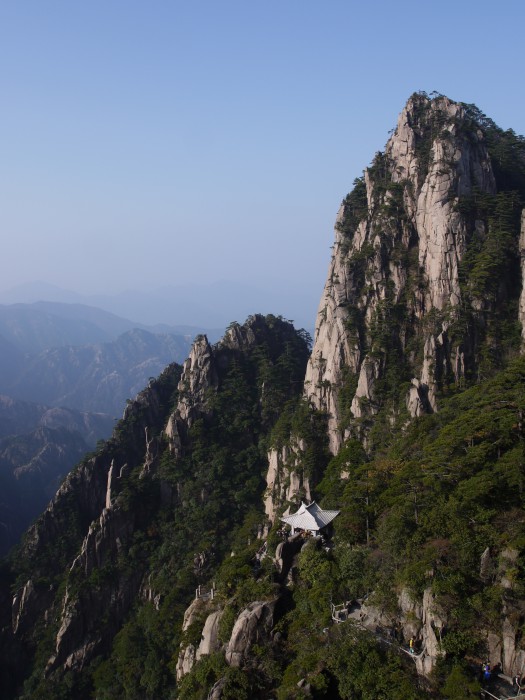 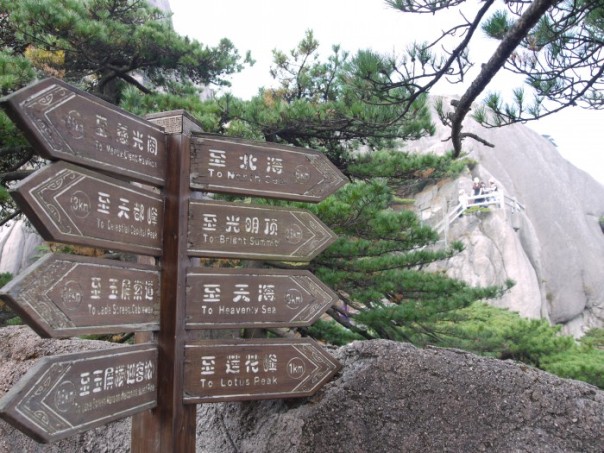 My only regret was that I felt like I might’ve just wanted some extra time to just relax and take in the gorgeous scenery. It really does look otherworldly. So this month, I’d started reading some folktales having to do with West Lake but decided to take a break and read up on some Beijing folktales. So much of the Beijing folktales have to do with history, less with magic and transformation than some others that I’d seen from the northeastern provinces but it was really eye-opening to read more about Beijing’s history and the stories that are related to specific places such as the Forbidden City (故宫), Beihai park (北海), and the old Summer Palace (圆明园). I made a trip up to Beijing for a week and was really fascinated by the juxtaposition of the traditional and the modern & international, especially in the preserved hutong (胡同) alleyways which mixed this beautiful traditional architecture with modern bars and lots of guitar shops! I’d never been to Beijing before so the general feel of it was very surprising to me; I’d just assumed it was similar to any other modern city but obviously, I was wrong. Anyway, I ended up spending Thanksgiving in Beijing, eating a great Thanksgiving meal with the other Fulbrighters on Wednesday night and then exploring an abandoned half-built amusement park on the outskirts of Beijing called Wonderland. Really creepy but also really cool to see, what with the farms all around and just the deserted feel of it.

Thinking about it, Hangzhou is actually a lot more modern than Beijing (maybe because during the 13th century, large sections of the city were destroyed by fire several times due to overcrowding and wooden buildings and was occupied in 1856 & 1860 by the Taiping Heavenly Kingdom who caused a lot of damage. Thanks, wikipedia!) The other night, I actually wandered into the oldest street in Hangzhou, He Fang Jie 河防街 which was tourist-y but fun and right next to the only mountain in downtown Hangzhou, Wu Shan 吴山.

4 thoughts on “On mountains & hiking”